The volcanic immersion circuit brings us through the Tromen natural protected area, therefore here is an introduction about this area, that also has a great importance for the region’s ressources. It is even more important to share information about it that the lower of water levels that has been observed these past years highly endengers fauna and flora in the region, not to mention cattles.

Before anything ; what is a natural protected area ?

A protected area is a « clearly defined geografic space, recognized, dedicated and managed by legal means and other efficients ways in order to ensure nature’s long-term conservation, its ecosystems and associated cultural values » (UICN, 2008)

There are 15 natural protected areas in the province of Neuquen ; we cross two of them during the trecks: Tromen (A) and Domuyo (B). Another article will be shared about the Domuyo area. 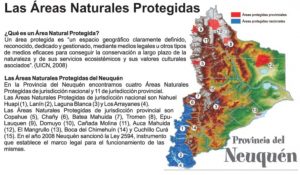 Tromen is lcoated in the north of the Neuquen province and covers both Chos Malal and Pehueches districts. Its superficy is 30 000 hectares. It is a provincial parc, managed mostly for conservation of eco-systems and with leisure purposes.

What are the conservation objectives of this site ? 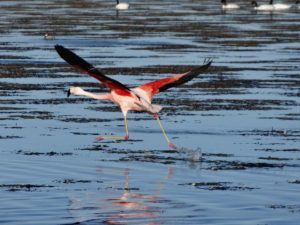 The main objective of the ANP Tromen conservation is the protection of birds in two specific areas : The Tromen laguna and the swamps of Los Barros. There are 112 species of birds, of which 37 are aquatic. Other conservation objectives include protection of the Andin Cordillera fauna and flora species, maintaining the quality and volumes of water flows as well as the conservation of Colimamils (Endangered tree, see dedicated paragraph below) and oter endangered species.

About the importance of the Tromen site protection :

The humid areas such as the Tomen are listed as the most productive eco-systems in the world. The are the basis for a biologic diversity that nurture large amounts of birds, mamals, reptiles, amphibians, fishes, invertebrates and plants. They are a water source for human and animal consumption, agriculture and industry. The humid areas set the local climate, keep nutriments and reject sulfure. They bring us natural ressources (Wood, fishing) and are a base for leisure activities.

The local culture is strongly related to these areas, they have contributed to the development of its identity.

In a nutshell, conservation of the Tromen area is key to local biodiversity, human activities such as breeding, agriculture and industry and life in general in the part of the Neuquen province ; let’s not underestimate its importance !

Geomorphology of the area and volcan’s history :

Geological history : 150 million years ago, all the area was covered by the Pacific Ocean. This explains why we can find marine fossils (Ammonites). Water started to withdraw while the Wind Cordillera rose ; it ended up its formation 60 million years ago and was the first dividing line between the waters of the Atlantic and the Pacific in this region.

The Tromen volcano is 4114 meters heigh.

Fauna of the Tromen area, the small and big animals that surround us during the tour :

There is a very wide variety of animals in the area. Amongst the mamals, one can easily identify the « tuco-tuco », the « piche patagónico », le red fox and the badger. The main carnivore of the area is the puma, its population recently rose which sometimes damages the cattles.

Amongst the 112 species of birds, we notice the majestic condor, that crosses the area looking for carrions for food, but doesn’s nest into the area. Raptors that are seen the most are the eagle and the nanco.

Endangered species : The guanaco used to live in the Tromen area but disappeared several decades ago. The choique still remains, with a very small population. Both species are victims of the caza furtiva (Unauthorized hunting).

The Tromen natural area has also been named important area for birds conservation : 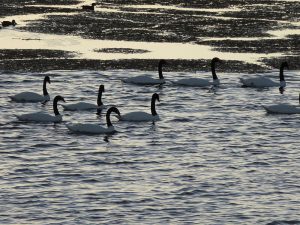 Aquatic birds are the main reason for which this site is named Ramsar ; amongst other species (Canard Cuchara, canard Zambullidor grande, garza bruja), we can find the black-neck swan, easily recognizable by its size and colour. Each year, around 500 couples set their nest in the Tromen laguna.

During winter the Tromen laguna freezes and birds migrate. Some parts of Los Barros do no freeze and some birds stay there. Champions of migration are the ones that set their nest in northen America and fly thousands of kilometers until Tromen every year.

Flora of the Tromen zone : 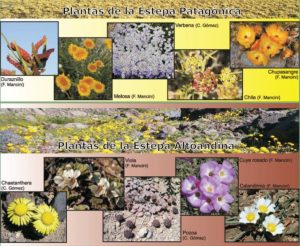 Most of the flora of the tromen site is made of steppes full of small trees and plants from the Patagonian and Andin Cordillera. Around the Tromen moutain, conditions are tougher therefore plants are smaller. Spring does not last very long and in order to ensure polenization, plants tend to have attractive colours and sweet smells. 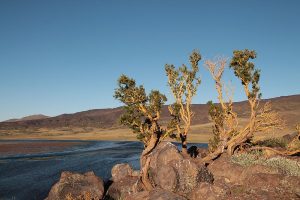 Its name does not really tell us what it is, but it is th highest shrub of the zone (Up to 4 meters high). It is a specy that can only be found in Argentina and Chile. The Colimamil has a very important environmental function : It hosts various animals, and mostly birds. Unfortunately, due to its important heating possibility, the Colimamil has widely been used by populations and has now disappeared in many areas.

Though we often confuse it with a seagrass, it is an aquatic plant. While going through summer and water level from the lake goes down, the gambarrusa turns redish on almost all of it surface. It has a great influence on the lake life. Some birds use it as nest, others as food. In a surprising way, this plant has yearly cycles ; it can be found some years and not some others. We still do not know the exact reason for these cycles, but presence or absence of the Gambarrusa strongly impacts the affluance and reproduction of birds in the area. Some studies have shown that the presence of this plant has a positive impact on water clearness and presence of shellfishes that are a basic nutrition for many birds (And especifically for the pink flamingo).

THE DARE TO THE VOLCANO SUMMIT

Back in the days, no one dared to defy the highest mountains of Patagonia. Beliefs stated that they hosted Gods of the ancient people ; climbing them would mean defying the spirits living there. One of the most famous stories about the Tromen tells that whilst a priest  was trying to climb the volcano, a horrible storm started ; forcing him to shelter in a big rock at the foot of the volcano. The morning after, once having waken up and thanked to still be alive, he carved the rock that protected him with the sentence : « Stone of Julepe » (Piedra de Julepe).

WHAT IS BEING DONE TO PROTECT THE TROMEN NATURAL AREA ?

With the support of various organisations, the Neuquen’s natural protected areas department leads various conservation activities : retrieval of Colimamil seeds in order to extend the species population, environmental education, restauration of the nesting zones of birds, follow-up of the water level and quality, management of pastures (Evaluation of natural pastures, calculation of each farm’s productivity).